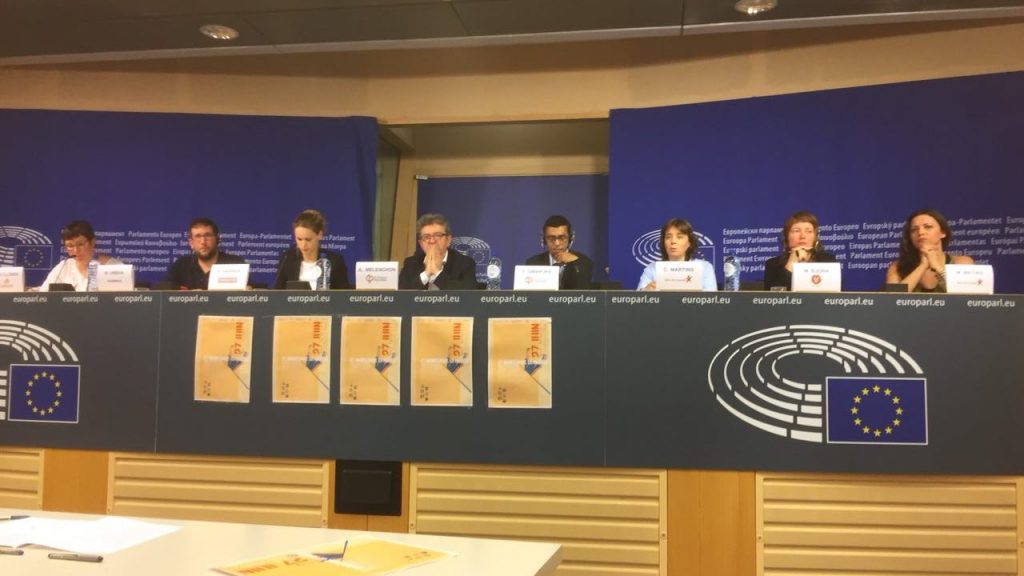 Europe has never been so rich while at the same time so unequal. 10 years after the onset of the financial crisis, we conclude that European leaders have condemned us to a lost decade. The dogmatic and irrational application of austerity policies did not solve any of the structural problems that led to this crisis. On the contrary, the Union saved the banks and their owners, while the costs and blame were put on the people. People who suffered and continue to suffer under harsh austerity policies afflicting their welfare and labour rights. This policy must be abandoned.

This means we need new European rules, free of the dogma of market liberalisation, rules which put people and the planet first.

It is time to break with the undemocratic European treaties. It is time to build a new order that utterly refutes the logic of imposed austerity and the promotion of social and fiscal dumping. It is time for those who believe in democracy and social justice to step up and break up this downward spiral. Together we will work towards real change for people, against the old unfair order.

Never has there been a greater need for a progressive movement and for international cooperation based on democracy and solidarity. The choice for the people cannot be locked up between the neo-liberal status quo and the far-right. We offer a real alternative:

We will fight social dumping and for secure social rights. Workers’ rights to social protection through laws and collective agreements must take precedence over the free movement of corporations. We oppose that workers are pitted against each other, we want a space for upward social convergence. Therefore, we must break with the European treaties and scrap the European Semester. European cooperation must be based on a social protocol, which puts working conditions as well as social and collective rights well above the free movement of services and capital.

We will demand tax justice and a fair financial system, because the free movement of capital must not be prioritized over the wellbeing of people. Together, we will stand against tax evasion and tax havens, both within and outside the European Union. We will work together to ensure that credit serves general interests rather than special interests. To this end, we will work to ensure public scrutiny and public ownership in the banking sector.

We will fight against climate change and for ecological sustainability. Decreased greenhouse gas emissions have to be a main priority. Therefore, we must break with the Union’s market based approach to climate change. Instead, we need a clear ‘climate’ based approach as well as public investments in clean and safe energies and in green technologies.

We will stand up for equality and women’s rights. The European Union’s attacks on welfare structures and services in many countries are a threat to equality and women’s rights. This must change. We must make equality a central part of all European policies in order for it to be achieved. We defend the right to safe and legal abortions and fight against all forms of gender-based violence.

We demand democratic and sustainable international trade policies and reject free trade agreements. The interests of big corporations’ cannot be allowed to overrule democratic decisions aiming to protect and strengthen social, economic and ecological safety. Therefore investment clauses giving corporations the right to sue states for democratic decisions have to be removed from all of the European Union’s trade agreements.

We defend the right of asylum and oppose Fortress Europe. People are fleeing and migrating because of war, conflict and poverty, oftentimes caused by interventionist and militarist policies in third countries. Europe must be a continent where people seeking refuge are guaranteed rights and safety. We will stand against xenophobic and racist policies wherever they threaten democracy and human dignity.

We work for peace and disarmament. We oppose the militarisation of the European Union. No budgetary funds should go to armament. We want an effective ban on the export of weapons to dictatorships, countries at war and countries that are violating human rights. We will work to stop the neo-colonial external policy of the Union and the depredation of other countries’ resources.

In the spirit of the Declaration signed in Lisbon on the 12th April 2018, we will collaborate and campaign across the European Union on these issues. We are for a fundamental change. We are tired of waiting. We want fair and equal cooperation, one based on democracy and solidarity, that fully respects the sovereignty and interests of the people.

It is time to build a peoples’ Europe!